Flåmsbana – a masterpiece of railway engineering

When the Bergen Railway opened for traffic between Eastern and Western Norway in 1909, the next stage of the planned railway network was already on the drawing board – but many years would pass before visions became reality. From Flåm, a village by a fjord arm of the Sognefjord, there was a poor and narrow road up to Kårdal, the uppermost farm in Flåmsdalen valley, and further up to Myrdal, high up on the mountain. In fact this road had been used to transport building materials for the construction of the Bergen Railway. Railway engineers widened and improved this road, to accommodate the increased traffic required during the construction period.
The first surveying for Flåmsbana’s railway route was carried out in 1893. The alternative considered at that time was to combine a narrow gauge adhesion railway with a rack-driven railway. In 1908, Norwegian Parliament adopted a National Railway Plan that formed the basis of a further expansion of Norway’s railway network. In this plan, the secondary line between Myrdal and Flåm was included. In accordance with the surveying, the plan proposed a 1067 mm gauge railway track – and adhesion railway – from Flåm to the top of the Flåmsdalen valley, and then a rack-driven railway up the last steep stretch up to Myrdal. The conclusion was that a cable car woul be impractical, but that the ideal solution would be a full-fledged adhesion railway for the entire route. In keeping with this, the Norwegian Parliament in 1916 approved the government’s proposal for a 20.26 km long adhesion railway of normal gauge (1435 mm). In 1923 the final decision was made to electrify the future railway.

On 1 July 1906, when the first scheduled trains started running between Voss and Myrdal, it was the dawn of a new age for this region. During the summer months, there was a steady stream of tourists from Myrdal down the steep wagon road of the valley, to the fjord below. These travellers were transported by horse and trap. On some days, there might be as many as 30–40 carriages trafficking this road at the same time. At the foot of the steep bends of Myrdalssvingene, there was a sign imploring: “Be gentle to your horse and walk up the hill.” Most travellers followed this advice, but many tourists were encumbered by a physique that made it impossibly strenuous for them to ascend to the top, through all of the 21 hairpin bends.

Initially there were 120 construction workers engaged on Flåmsbana; soon the work force grew to 220 men. In addition there were wagon drivers transporting materials when weather conditions allowed, and many others who had jobs linked to the railway project. All in all, between 400 and 500 people were mobilised during the first part of the construction period. After Norway was hit by the economic recession of the 1920s, the numbers dwindled year by year. 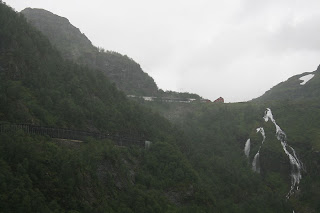 The greatest challenge was the tunnels required on Flåmsbana. Work on the longest, the Nåli tunnel, started as early as 1924. The 880 metre Vatnahalsen tunnel was an engineering masterpiece. Inside the mountain, the railway actually makes a full 180 degree turn! This is necessary in order to manage a steep enough ascent. Through an opening in the tunnel wall, travellers catch a glimpse of the valley and another section the Flåmsbana. Actually, this “window” was unplanned, but construction had carved the mountain wall so thin that the engineers thought it safest to open this section at Hylla (the “mountain shelf”).

Construction of the tunnels was demanding and time consuming. There are 20 tunnels, totalling 5692.4 metres, and all but two of them were carved by hand. Every metre of tunnel cost one of the navvies (rallarne) a month’s hard labour. Despite the dangerous work being carried out at a high tempo, and with insufficient safety measures, there were only two fatalities during the entire construction period.

In 1898, during the construction of the Bergen Railway, a small power plant was built at Kjosfossen falls. Today’s travellers can still see the remnants of this facility. A new power station at Kjosfossen was put into operation on 27 October 1944 – and less than a month later, the first electric trains were rolling on Flåmsbana. The waters of Kjosfossen come from Reinungavatnet lake, and the river is led through a water tunnel under the railway track. 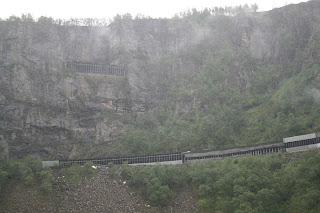 Flåmsdalen sees a lot of snowslides and avalanches. To avoid the most exposed areas, Flåmsbana crosses the river and valley floor three times. Instead of building bridges, the engineers led the river through a tunnel below the railway track. However, it is to the west of Blomheller that we find the most dangerous natural feature – Trollaskredet. Even on a winter with normal snowfall, there are snowslides from this high mountain shelf. In 1928, several houses were blown away by the powerful blast wind that accompanies snowslides, and not many years ago a blast wind tore away one of Flåmsbana’s electric lines. This is the only place between Flåm and Myrdal that the construction road, which goes up the valley, passes through a protective tunnel.

During World War II, Norwegian newspapers could report that the first scheduled train on Flåmsbana ran on 1 August 1940. But the opening of Flåmsbana was a practical, no nonsense affair – attended by a freight car filled with cargo. At 10am the train left Flåm, pulled by a small steam-powered locomotive that had been redirected from Bergen, to which was attached the conductor’s car and a single freight car. The locomotive used for these first trips was no. 425, type 25d. 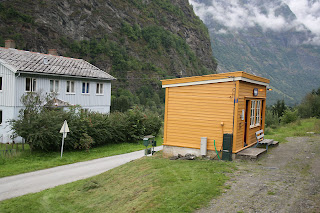 On 10 February 1941, Flåmsbana was opened for regular passenger traffic, with two trains in each direction daily, corresponding with the day trains on the Bergen Railway. The train from Myrdal down to Flåm took 1 hour 5 minutes, while the upward bound train required an extra 15 minutes. Today, Flåmsbana takes 60 minutes for both the ascent and descent.

In the beginning, Flåmsbana was run with small, steam-powered locomotives. It wasn’t until 1944 that electric locomotives were pulling the trains. From 1947 until the early 1970s, El 9 locomotives dutifully pulled the load. By then, however, they deserved retirement. Today, at Flåm railway station, one of these workhorses stands in a place of honour. Other locomotives have also done duty on Flåmsbana: the El 11, the electric BM 69 train sets, and for a short period the Swedish-produced X10. Today, the trains on Flåmsbana are being pulled by El 17 locomotives. 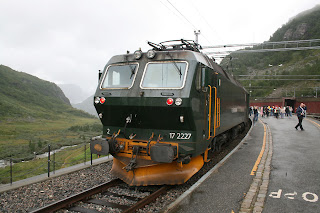 In the 1950s and 1960s, Flåmsbana was one of the secondary lines whose continued operation was being brought into questioned – but gradually passenger numbers started to increase. In the 1980s, the Norwegian Railways (NSB) considered limiting traffic to the summer, since they lost a lot of money during the poorly trafficked winter months. Local patriots were soon fighting to preserve Flåmsbana as a year-round railway. On 1 January 1998, a new age was inaugurated when Flåmsbana was transferred to a private company. Flåm Utvikling assumed responsibility for sales and marketing, and product development of Flåmsbana. However, the Norwegian Railways (NSB) and the National Rail Administration (Jernbaneverket) are still responsible for safety, maintenance of the railway line, staffing and actually running the trains. 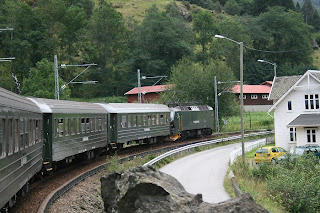 The objective of Flåm Utvikling is to preserve and develop Flåmsbana as an attraction to travellers, and to develop the region of Flåm and Aurland into one of Scandinavia’s foremost travel destinations, with a high focus on adventure. Today Flåmsbana appears in new design, with locomotives and cars coloured a natural green, with new interiors, and a unique multilingual guide system. There are six locomotives and 12 railway cars. From September to April there are four daily departures in each direction, while eight–ten departures are required to carry all the passengers who want to experience Flåmsbana between May and mid-September. In addition, improved viewpoints and expanded platforms enhance the travellers’ experience – Flåmsbana is guaranteed to be an unforgettable railway adventure through some of the wildest and most dramatic scenery in Norway!

With the increase in travellers from throughout the world, Flåmsbana has become one of Norway’s most popular and successful tourist attractions. In 2007 Flåmsbana set a new record with 582 286 passengers. Freight traffic, however, has been reduced to a minimum.

If you want to learn more about Flåmsbana’s colourful history, we highly recommend a visit to the Flåm Railway Documentation Centre. The museum yields a deeper insight into one of the steepest railway lines in the world, the navvies and engineers who built the railway, Flåmsbana’s technical development, how daily life in Flåm has changed through the years, as well as facts about the operation of the Bergen Railway. 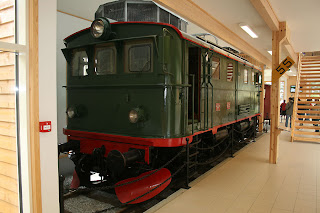 The Flåm Railway Documentation Centre displays an El 9 locomotive and a hump locomotive, and exhibits include photographs and objects, written documents and sound effects. Visitors can also view a convincing video of the adventurous journey on the Flåm Railway. Museum collections include records on the railway’s early history, as well as on traffic and trade up and down Flåmsdalen valley in the years before the railway was built. The Flåm Railway and the Flåm Railway Documentation Centre are ideal for so-called Technical Visits. Participating groups have a unique opportunity to study maintenance, the environment, tunnel safety, daily operations, sales and marketing.

During the summer months an impressive 800 000 travellers pass through the fjord village of Flåm. The Flåm Railway is at the very top of their list of attractions to experience!