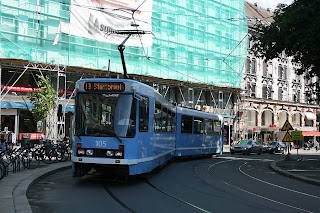 The Oslo tram system has 72 trams.

40 six-axle trams of type SL79, numbered 101-140. These are single-articulated, and operate in one direction only. They were delivered in two batches, the first batch, with 25 trams, started arriving in 1982, the second batch of 15 trams arrived in 1989. 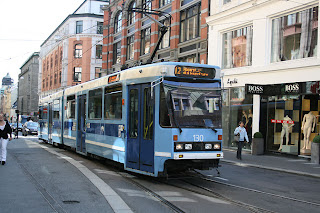 The two batches are fairly similar, but with different interiors, and the rear door of the second batch is double. The first ten trams were produced by Duewag of Germany, the rest were produced by ABB at Strømmen, west of Oslo. The trams are 22.18 metres long, 2.50 metres wide, 3,41 metres tall and weigh 32.8 tons. The tram can take 163 passengers, 71 of which are seated.

32 eight-axle trams of type SL95, numbered 141-172 and delivered in 1998-2006. These double-articulated, partly low-floor trams can go backwards as well as forward due to the presence of driver cabs at either end and doors on both sides. 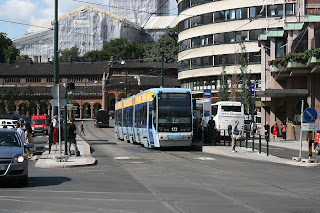 They can therefore operate on the Ullevål line to Rikshospitalet which does not have a turning circle at the end of the line. However, the large turning radius and heavy weight of the tram makes it unsuitable for some of the lines to Majorstuen, which have poor tracks and sharp turns. The SL95s were delivered by the Italian company Ansaldo/Firema, now Ansaldobreda. The SL95 is 33.12 metres long, 2.6 metres wide, 3.62 metres tall and weighs 64.98 tons. The tram has a capacity for 212 passengers, 88 of which are seated.
Gepost door Greyhound op 16:26