Roll-out of the first electric articulated power unit for Arriva 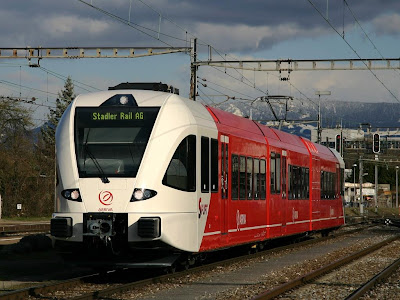 Arriva plc and Stadler Rail AG are jointly celebrating the roll-out of the first electric articulated power unit (EMU-GTW) in Bussnang today. Arriva plc ordered seven EMU-GTWs at a cost of around EURO 30 million from Stadler at the end of November 2006. The railcars will be used on the Dordrecht - Geldermalsen track in the province of Zuid-Holland (Merwede-Lingelijn).

Additional EMU-GTWs for Arriva: The Arriva group is one of the leading private quoted providers of regional rail and bus services in Europe and has its headquarters in London. Arriva Netherlands ordered one two-part GTW 2/6 and six three-part GTW 2/8s a good year ago, after having ordered a total of 43 diesel-electric GTWs for the Groningen-Friesland region in 2005. Today, less than one and a half years later, the two companies can celebrate the roll-out of the first EMU GTW together. In the meantime the fleet of Diesel GTW's of Arriva has also been increased by another 3+5 trains. Christian Konig, Sales Director Switzerland & Netherlands Stadler Rail Group, is delighted with the success of the undertaking: We are proud that this order has allowed us to expand the GTW family of railcars with this version for 1500 V DC and that modern low floor trains are now in operation in yet another province of the Netherlands. Stadler has also completed this order in a very short time. This was only possible thanks to the great effort and commitment of all those involved. I am very grateful to all of them. 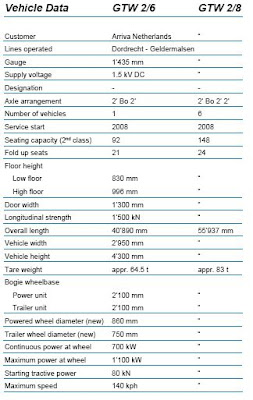 Anne Hettinga, Director Arriva Netherlands: The Merwede-Lingelijn is a very important track for Arriva and many inhabitants use the train every day. Our ambitions are high: we aim for more than 50% grows of passengers. But the local government also has high ambitions and in the next few years the track will be upgraded and they will build five new stations. Therefore � given our experience with the GTW in the north of Holland � this is a perfect train to service the Merwede-Lingelijn.

The railcars: The EMU-GTWs were manufactured in a version for 1500 V DC. They were adapted from the basic version of the diesel-electric GTWs for Groningen-Friesland for the new area of operation. They are part of the fourth generation of GTWs, meet the new Dutch requirements for collision safety and share the modern Arriva design look. Stadler Rail Group, the system provider for customer-specific solutions in rail vehicle construction, has facilities in Switzerland at Altenrhein, Bussnang and Winterthur, in Germany at Berlin-Pankow and Velten, in Poland at Siedlce, in Hungary at Budapest, Pusztascabolcz and Szolnok and in Algeria at Algiers. The Group employs a workforce of approximately 2,200 around the world. The best known vehicle series of Stadler Rail Group are the globally successful GTW articulated railcar with 437 trains sold, the Regio Shuttle RS1 with 364 trains sold and the and the Fast Light Innovative Regional Turbo-train FLIRT, of which 404 have been sold in the railway segment and the Variobahn, with sales of 235 vehicles and the newly developed Tango, with 90 vehicles sold in the tramway segment. Stadler also produces carriages and diesel-electric locomotives and is the world�s leading producer of rack rail vehicles. For further details please contact: Stadler Rail Group, Mr Tim B�chele, Issue manager, Telephone: ++41(0)71/626 31 57 tim.buechele@stadlerrail.ch
Gepost door Greyhound op 21:54