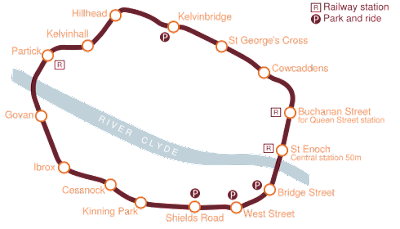 The Glasgow Subway is an underground metro line in Glasgow, Scotland, United Kingdom. Opened on 14 December 1896, it is the third-oldest subway system in the world after the London Underground and the Budapest Metro. Formerly a cable railway, the Subway was later electrified, but its twin circular lines were never expanded. Originally known as the Glasgow District Subway, the system was renamed the Glasgow Underground in 1936. Despite this rebranding, many Glaswegians resolutely continued to refer to the network as "the Subway". In 2003 the name Subway was officially readopted by its operator, the Strathclyde Partnership for Transport (SPT). It remains one of only two underground metro-type systems in the UK outside London, the other being the Tyne and Wear Metro. A £40,000 study examining the feasibility of an expansion into the city’s south side is in progress.